Pourquoi lisons-nous is an ongoing investigation on reading as experience.

This investigation is carried out through the collection of stories of different readers as well as a cycle of forums moderated by artists, writers, and academics on our ways of reading and being. Taking Lyn Hejinian’s “the open text” as an inspirational model, here, the traditional hierarchy between the author and their readers breaks down and balances out. Each reader, each witness, each academic, artist, and writer is a co-investigator in this community of experiences.

This investigation create shared spaces and experiences that put hospitality, storytelling, and environments at their center. In order to answer the influence of reading on the lives of readers, their perceptions of the world, and their relationships with others, I collected testimonies in readers’ homes over a dinner I cooked for us in company of close friends and partners. In such a practice the poetic investigator co-investigates with the ‘subjects’ of their investigation, creating a lyric-narrative process where the reader is a co-author of the text with the writer. These interviews and field work, as well as the more academic wing of this investigation, were conducted in the spirit of Norman K. Denzin’s reflexive (performative) interview, which puts the formation of communities at the heart of the interview practice and opens up their role in the exchange and creation of narratives with the participants. 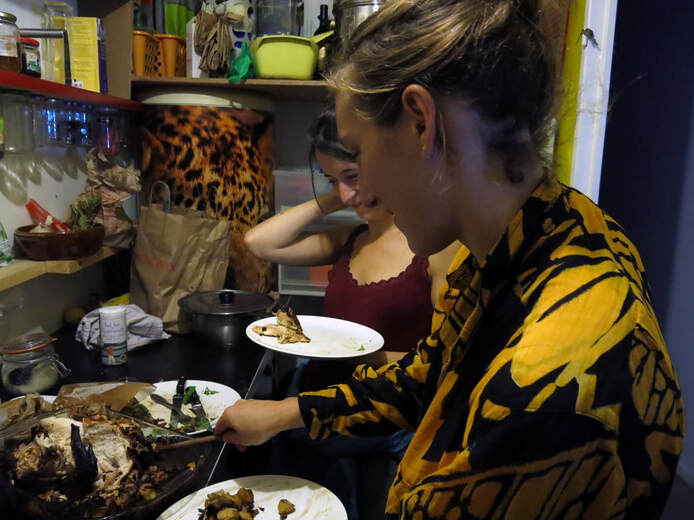 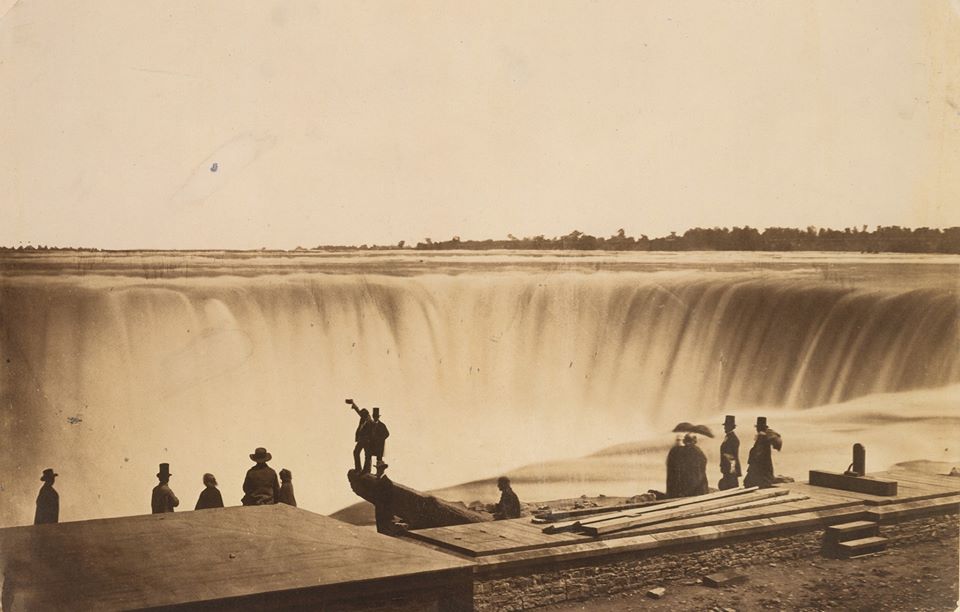 on air on *DUUU Radio
All countries read in translation are invented countries.

We know well that translating from one language to another can give rise to misunderstandings and treacherous transformations. But when we read foreign literature in translation, this (bad) reading also provokes uncertainties surrounding the social and cultural customs of the country in question, its landscape and the character of its inhabitants. In the company of Frédéric Forte (poet, member of Oulipo, and occasional translator of North-American poetry), we will discuss the illusions that he’s been subject to concerning the United States and American culture through his reading of its literature (and the fantasies that reading in translation can give rise to in general). For F. Forte, the only real possibility to understand American poetry is to translate it. So, during this round table we will read North American writers in French and English in order to discuss problems associated with the translation of a foreign culture, even when we are intimately familiar with it. We will then proceed to a collective workshop and discussion around the slippage between American English and French and the links between these two literary worlds and literary imaginations. 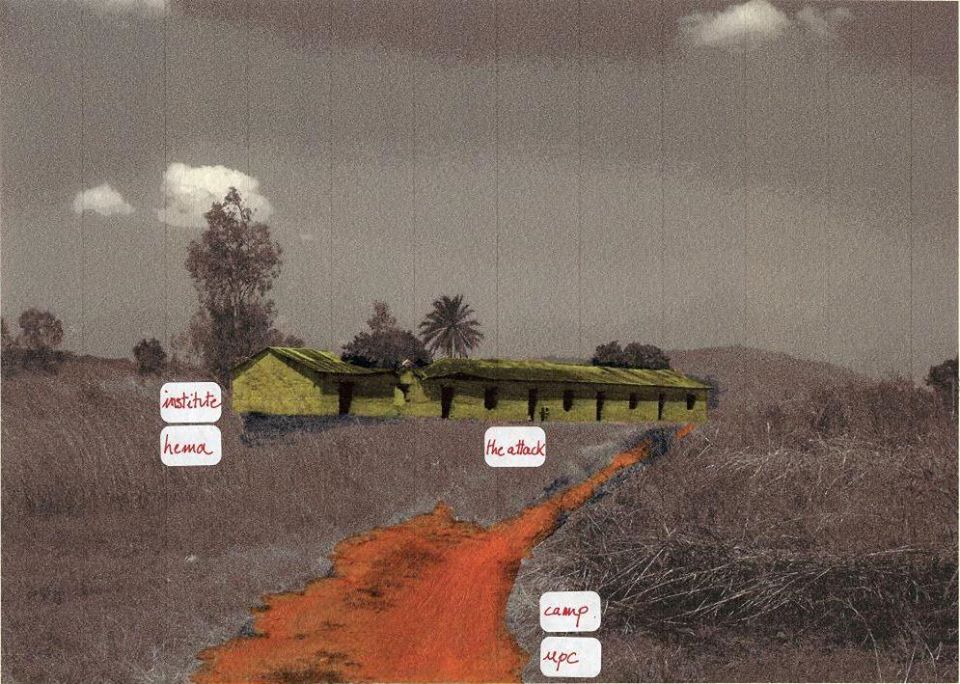 on air on *DUUU Radio
What is the boundary between the real and the poetic?

In conversation with the poet and artist Franck Leibovici we will ask how poetry can create a set of tools proper to the investigation in order to explore and mine big data, witness statements, and archives.

We will speak about the history of the literary investigation in France and in the United States and the links between these two traditions, from Charles Reznikoff to Emmanuel Hocquard. We will speak with Franck Leibovici and his methodology, which aims to break down and interpret large masses of data (docuements, images, etc.) through poetic dispostifs. In particular, we will reflect on the poetic shaping of his collected data : tinder chats and amateur sex tapes, amorous correspondences… (de l’amour, Jean Boîte éditions, 2019). a trial at the International Penal Court (bogoro, Questions théoriques, 2016), senatorial rhetoric and stalling (filibuster, Jeu de paume, 2013), military and activist websites (portraits chinois, Al Dante, 2007), a commission report on a terroist attack (9+11, ubuweb, 2005), powerpoint presentations (quelques storyboards, ubuweb, 2003)…

Finally, we will ask how poetic dispostifs can constitute another form of knowledge that acts directly within social contexts and within institutions. For the past several years in collaboration with the jurist Julien Seroussi, in partnership with The International Criminal Court, Franck Leibovici has been evaluating different poetic tools and how a mix of art and social sciences allows for another understanding of visual and textual evidence that complements a more traditional jurisprudential methodology. 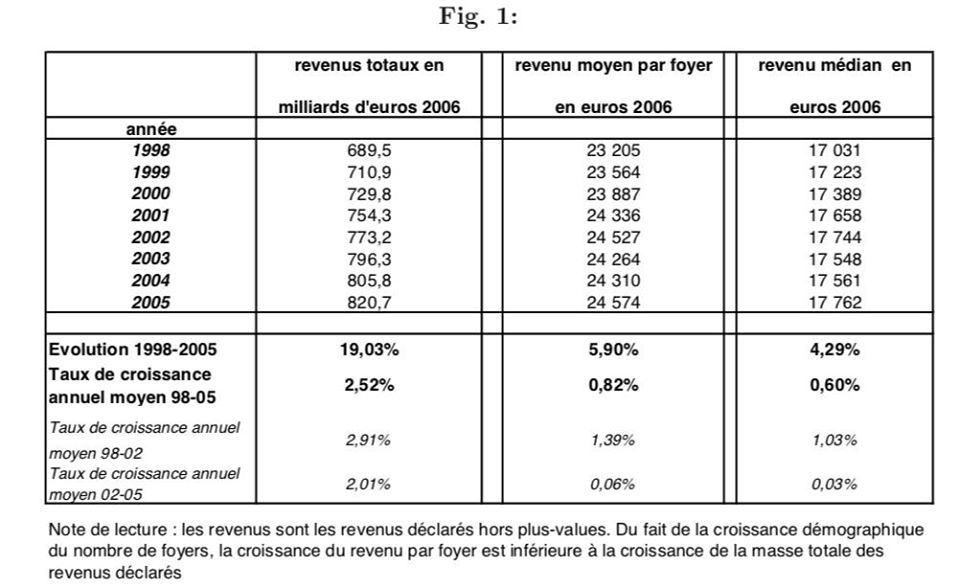 on air on *DUUU Radio
How much is art worth?

In the economy, an art market (or the book market) is often marked by a star economy : the most successful (in terms of sales) are able to make an enormous amount of money, while the rest of the artists generally live barely above the poverty line: winner takes all. From a political point of view, there’s certainly much to induce vomit and tears, even if vomiting and crying don’t induce much political change. From a moral point of view, nothing’s to be said and all nostalgia is forbidden. After all, it’s a system that’s no more immoral than the economy of inheritance and annuities that characterizes the great artists of the 19th and early 20th Century. But from an artistic standpoint, this obligates contemporary artists to transform themselves, their studios and their desks in the money-making machines. It’s perhaps more interesting and funnier. In any case, it’s the path that we will explore together.

From the origins of crime fiction, one of the principal inventions of the modern era, to the non-fiction novel today, we are witnessing a massive extension in investigative territory. We will consider the methodology of the investigator, in their profiles and incarnations, as well as the close relationship between literature and other social sciences (sociology, history, psychology), what Carlo Ginzberg calls the “evidential paradigm”. And we will revel in the pleasures when the reader, they too, plays the role of the detective. 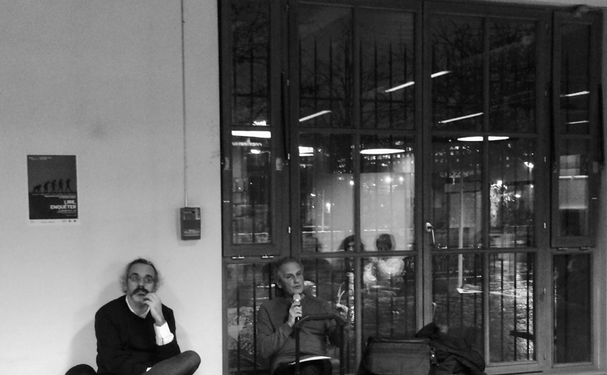 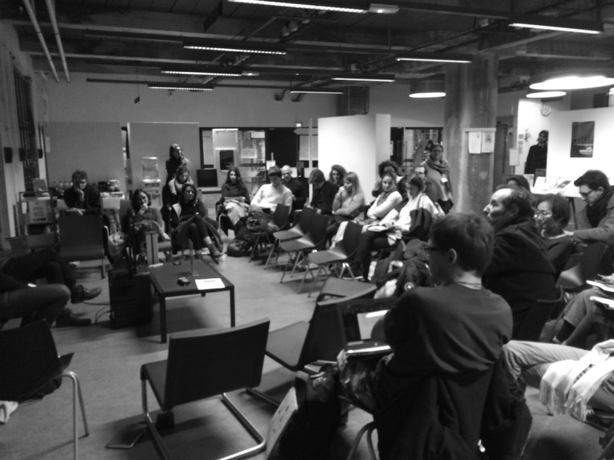 We often say that writers need to be surrounded by books in order to write. They use pages of others like a screen to protect themselves, but also like a diving board to take off. Using my own experience as a writer as a starting point, I will evoke some of the difficulties that we can encounter and methods we can use to protect ourselves before diving in. I will use various references from philosophy, from ethnography, and even from literature that I bend to my will, in a proposition that will be less of an analysis than a performance.

What’s the use of poetry and poets? What good is reading poetry if it doesn’t tell us a story, if it doesn’t stop violence, and sometimes even veils its meaning from us? More than any other genre of literature, poetry elicits mistrust, and even scorn: we accuse it of being elitist, hermetic, or egocentric, and will quickly accuse it of all the evils under the sun, but perhaps most of all, of expiring.

The Springtime of Poets this year will center around Beauty. Perhaps we read and write in a world in a state of extreme deterioration and pain to continue to believe in the possibility of a future, and to give ourselves the chance to search for one, to approach one on earth, and to speak about one when it seems to deny its own existence, and perhaps most of all in the texts that put it to the test. These questions will be at the center of our conversation with the Quebecois poet Denis Desautels.

We will reflect upon the manners in which we read poetry, as the question of why and how are closely linked and reveal the specificity of our relationships that links us to poetry. If we can’t read poetry as we might read detective fiction, does that mean we must oppose our fictional readings and our poetic readings (and consider one linear, cursory, immersive) as the reverse of the other (non-linear, disruptive, distant)? Finally, what differences are there between reading and listening to reading out loud, which is to say between the solitary and silent and attending a public performance of a poetry reading? 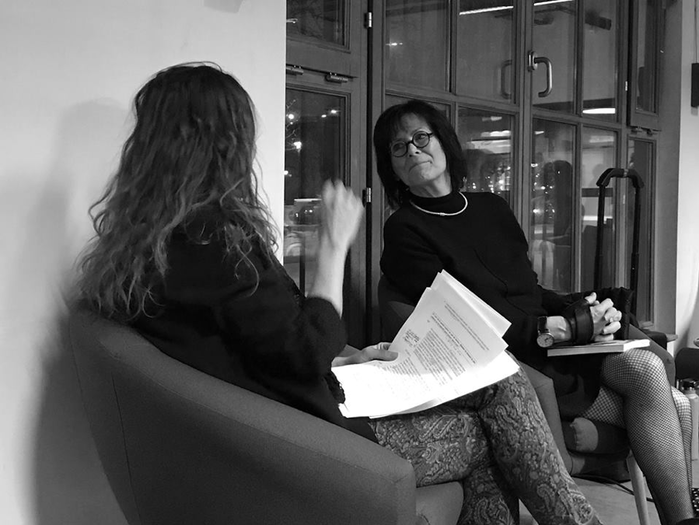 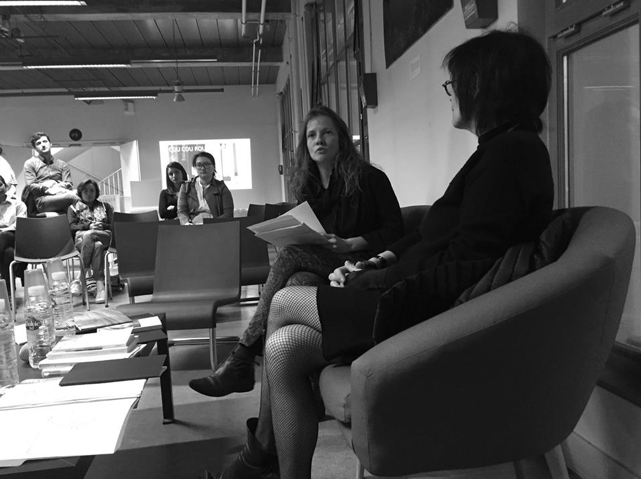 Love is the child of the Bohème! You know it. But do you know where this tune comes from? Who sings it? Is it Carmen? Are you sure?

Such is the history of a reader, who would like to read Carmen and not without change, but also of a mezzo-soprano who would also like to sing la Habanera, but differently. They discuss it, reread it, and look on suspiciously at the notes and words that make Carmen inside out, in music and text.

They will distribute pieces of paper to the public in order to offer new paths and new ideas of what Carmen is. Carmen appears in all different ways. This evening, they can’t and don’t know how it’s going to turn out, if it’s going to cry out, sing, chant, or improvise. Tonight, it’s the Carmen Surprise. 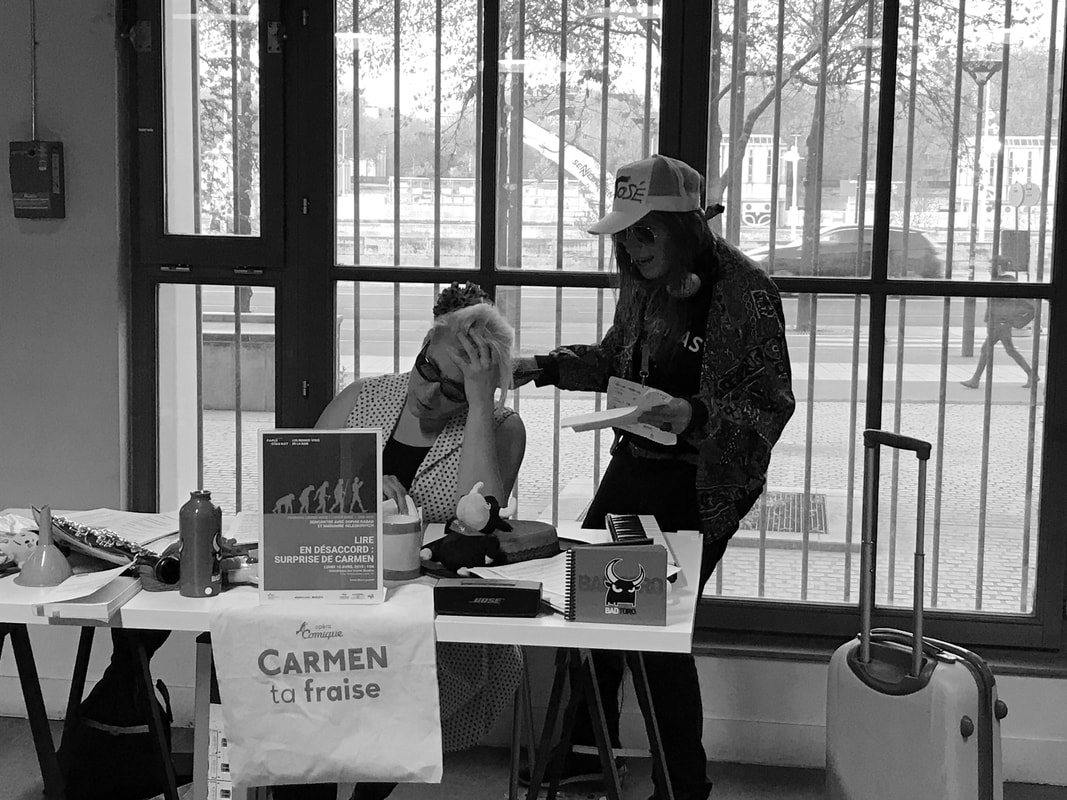 THE BOOK CLUB proposes to invent a geographic attentiveness: rather than separating body and spirit, theory and practice, this form of reading seeks the means to link concepts to sensations, to affects, to perceptions, to memories, to objects, to rhythms, and to space – as many resources as are necessary in order to deploy new regimes of comprehension. 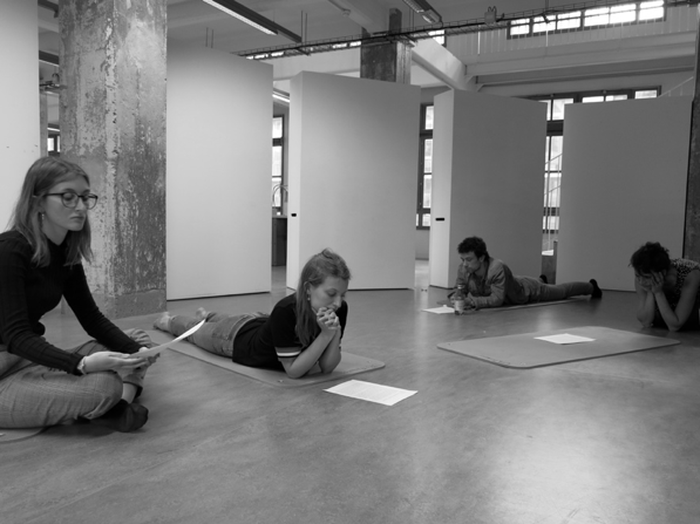 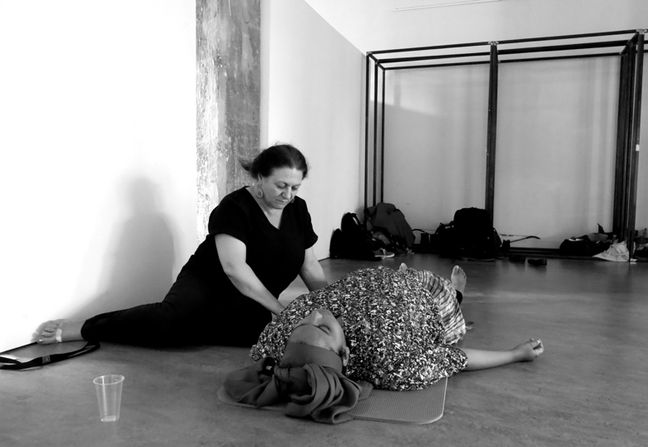 In her essay on illness, which has become a commonplace in the field of medical humanities, Virginia Woolf questions the effects of illness on the reader, and the manner in which the experience of illness deconstructs the reader and their expectations. She explores a series of texts, both classic and popular, examining the reader’s perceptions, as well as that of the characters. 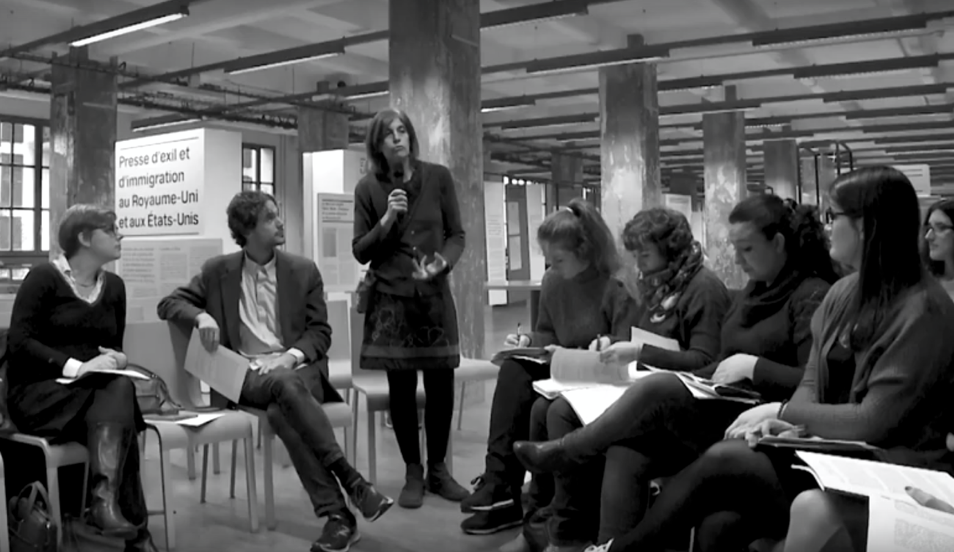 In her autobiographical essay Seeing Gender, (Bodies of Work, 1997), the American writer Kathy Acker (1947-1997) ties the piracy of gender representation to that of reading. She establishes a link between her mortifying experience of gendered representations that have been assigned to her, and a compensatory desire to read, and later on, a pirate writing, i.e. a writing that relies on piracy of other texts and other literary genres. Using a reading of this essay, as well as presentation of Kathy Acker’s work, as points of departure, we will seek to question the ways in which gender representations, and those that deconstruct them, are mediated by writing (in the broader sense of the term, literary writing, cinematographic writing). Thus, far from searching for the gendered essences in writing, we will seek to question what effect the question of gender has on writing. We might, in this way, evoke Rosmarie Waldrop’s texts, where gendered grammar is called into question, the epic question of gender as treated by women writers, or even the genre of the essay, where it will be a question of asking what becomes of cinematographic writing when gender works in and on the cinema, from one side of the camera or the other. 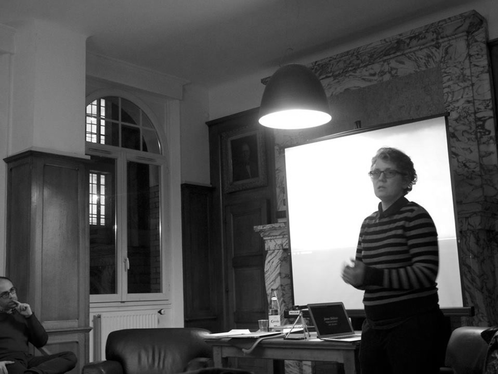 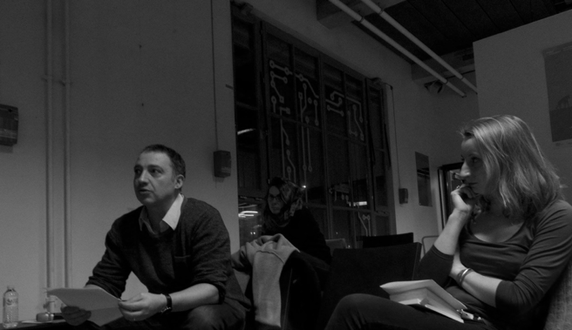 Is it really true, as we so often claim, that that reader, and more often the feminine reader — as with Emma Bovary — identifies with characters from the novels they read? How does this phe­nomenon operate? Why does it serve to discredit the novelistic fable, and to impute the mental fitness of those who submit to its contagious power? What iden­tity-mechanisms does the act of reading of a novel mobilize in the reader? Couldn’t we just as well say that reading novels favors a mobile plasticity, and a capacity towards disidentification? 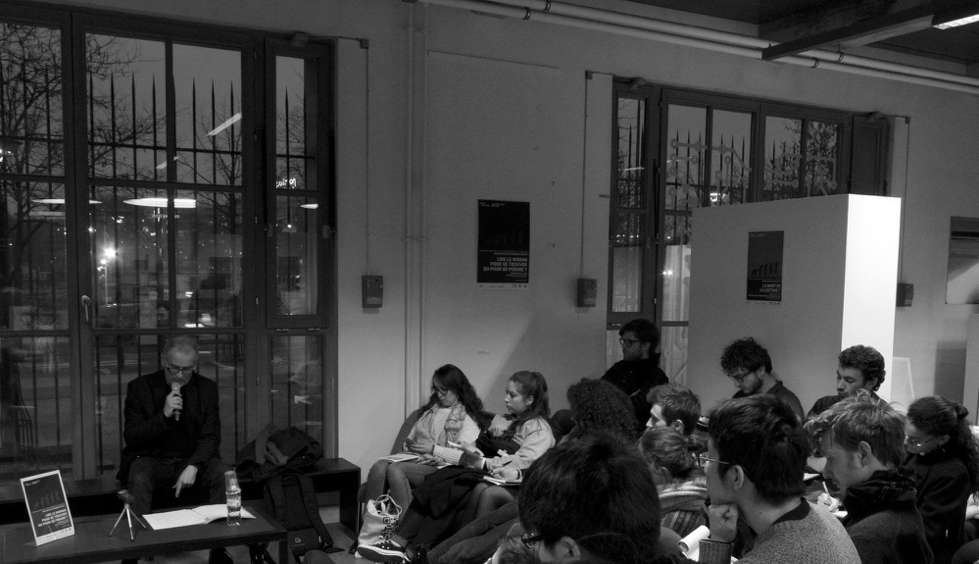 Why do we continue to read? How has our relationship with reading changed in the present era? If, in the future, we will con­tinue to read, what form(s) will this practice take on? What will be its place?

Long ago, in ancient times, read­ing was the exercise of power; knowing how to read was to have power, sometimes even to be powerful.  We will employ a highly subjec­tive approach to question ‘the death of reading’, rather than through a sociological optic based on statistics and surveys on the diminution of the number of readers. One question comes to mind: what will reading be and become when this act is irremediably alienated from all emblems of power. 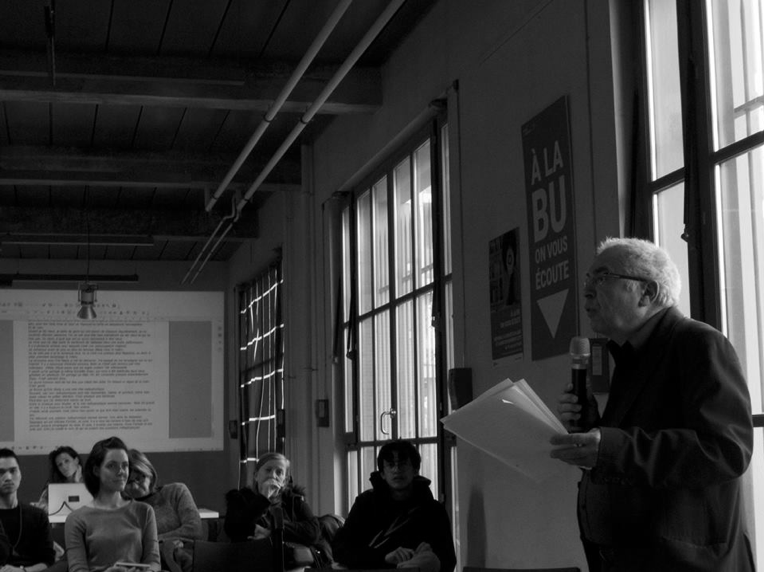